New opportunities for the development of the private sector in Uzbekistan

The President of the Republic of Uzbekistan signed the Decree No. UP-101 dated 08.04.2022″On the next reforms to create conditions for stable economic growth by improving the business environment and the development of the private sector” (hereinafter referred to as “the Decree”). The main novelties of this Decree are described below.

Benefits of the acquisition of state assets

The Decree defines that in order to accelerate the privatization process and create convenience for investors who have acquired state assets (state shares, package of shares, real estate):

The Decree also notes that from May 1, 2022, foreign citizens are granted the right to make investments in the form of acquiring the following new real estate objects under construction (with the exception of land plots), the list of which is approved by the Cabinet of Ministers, without requesting a residence permit in the Republic of Uzbekistan:

It should be noted that above mentioned purchases of real estate will not be the basis for obtaining permanent registration and residence permit in the Republic of Uzbekistan.

Changes in the sphere of tax and customs benefits

The Decree establishes a new procedure for granting customs duty exemptions, which will come into force on July 1, 2022. According to the new procedure, customs duty exemptions are granted only by the laws of the RUz. In this case, it will be necessary to obtain the conclusion of the Council for tariff and non-tariff regulation. Furthermore, the heads of the branch ministries and departments, local public authorities submit reports on the effectiveness of special tax and customs benefits for the development of the industry and (or) territory to the Ministry of Finance and the State Tax Committee before March 1 every year.

In order to create a level playing field for business entities, the following tax and customs exemptions applied to certain entities now apply to all entities in the relevant industry starting from May 1 of this year: 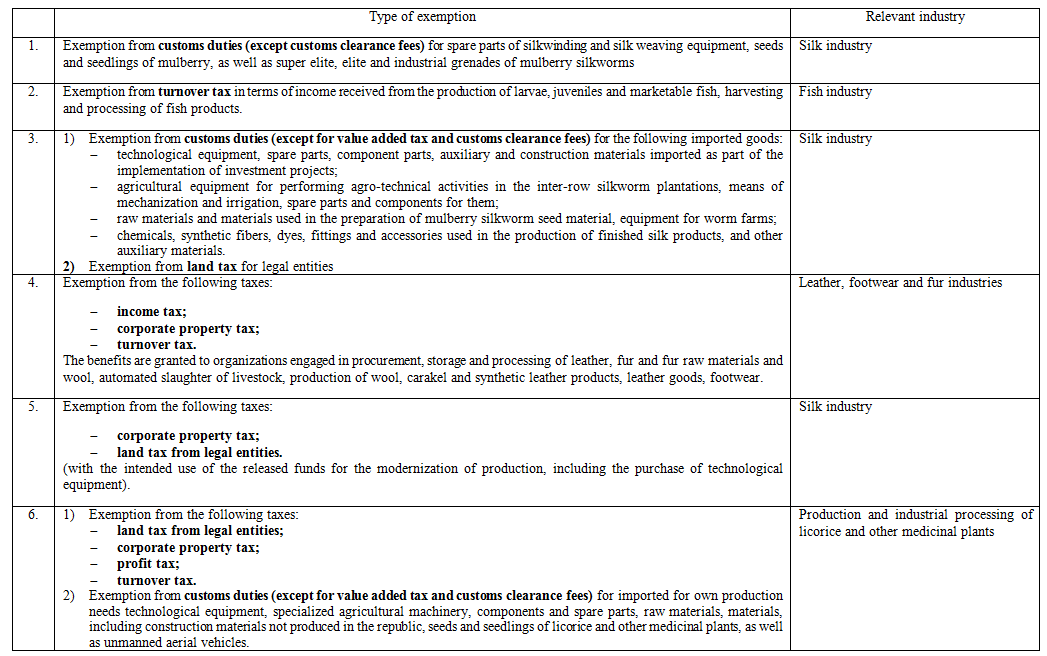 As per the Decree, a number of customs and tax exemptions are also cancelled according to the approved schedule.

The Ministry of Finance, together with a number of other state bodies, plans to:

The Cabinet of Ministers within 2 months period to ensure:

It is also planned to develop:

In order to improve the competitive environment, the Decree introduced a number of amendments to the antimonopoly legislation. In particular:

[1] The exceptions are subjects of natural monopolies, participants in public procurement and exchange trading, as well as economic entities whose price of products is regulated by the state.